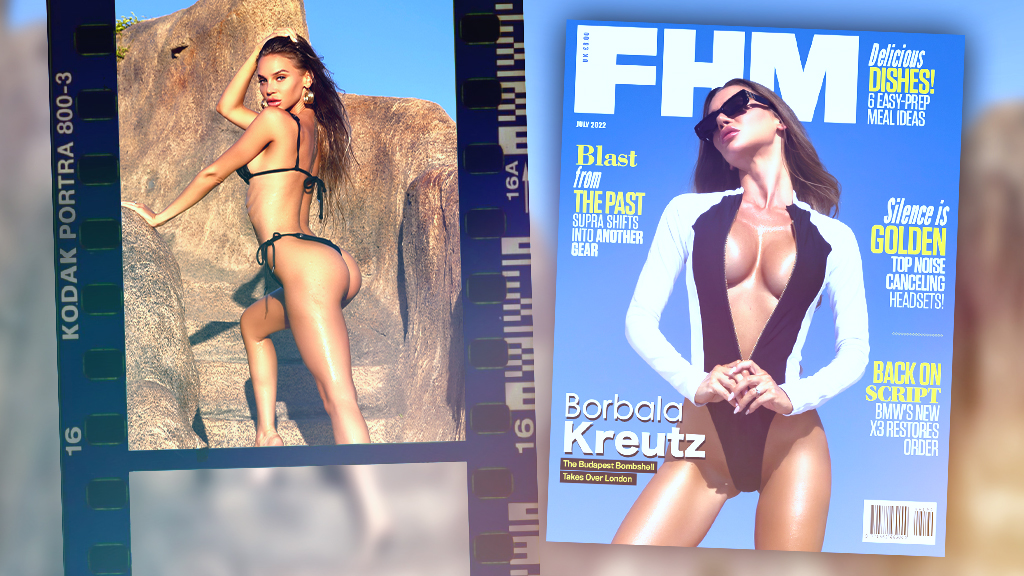 Borbala Kreutz is the new #HustleBootyTempTats supermodel, as confirmed by Will Palmer in a cover feature for the new edition of FHM UK!

Borbala Kreutz is the newest #HustleBootyTempTats supermodel, FHM UK can exclusively reveal, and the entire modeling universe can now be put on notice. The London-based Budapest-born bombshell has a global fanbase and has quickly ascended the ladder to become the most sought after swimsuit and bikini model in the entire world.

Having been handpicked by the legendary WWE sports entertainment “Special Counsel” Paul Heyman himself to be the new #HustleBodyTempTats supermodel, Borbala jumped on a private jet from London to Scottsdale, Arizona, to shoot these mind blowing pics exclusively for FHM.

“I can’t tell you how excited I am!” Borbala exclaimed during her shoot with the noted American photographer known as Studio977. “As a #HustleBodyTempTats supermodel, to be classed in the company of some of the most beautiful models in the world is an honor. Paul and the team are amazing, they just get IT! These beautiful supermodels, the locations on this gorgeous property in Arizona, the photographers are all at the top of their game, and don’t get me started on the private chef and his food! Once in a lifetime opportunity for me and I’m loving every minute of it.”

Borbala’s entry into the constantly-going-viral #HustleBootyTempTats supermodel brand comes at a time when the self-described “anti-influencer influencer” is blowing up all over the world. With Victoria’s Secret abandoning their celebrated “Angels” concept, and Sports Illustrated going “all inclusive” with their always-anticipated annual swimsuit edition, the time has never been better for a disruption in the supermodel game.

So Heyman, who disrupted the entire sports entertainment genre with his “Extreme” concepts, had his team at New York’s hottest marketing firm, the Looking4Larry Agency find a $25,000,000 estate in Scottsdale, Arizona for the exclusive photoshoot of all exclusive photoshoots.

The breathtaking Borbala hasn’t always been on this side the camera, though! Having moved from Hungary to the UK in 2010 to study becoming a makeup artist, Borbala was the one making the models look their best for the camera. That was at least until one photographer mistook her for one of the models and asked her to shoot with him and thank the lord he did. Whoever that photographer is… Sir, WE SALUTE YOU! From that moment on, Borbala the model was born and she hasn’t looked back since.

Borbala’s star was shining bright when she became the most popular international ambassador for the “Ignite” brand, travelling the globe and shooting in some of the most exotic locations on the planet. It was during these travels that Borbala fell in love with LA, the weather, the people, the nightlife and who can blame her? In the past year she has shot all over the world from the Maldives to Ibiza, Turkey to Dubai…but don’t worry men of Britain, London is still where her heart and home is.

One of Borbala’s heroes is none other than past FHM cover girl and regular Pamela Anderson, the legend who Borbala has been likened to in certain shoots. “Oh my god, don’t get me started on Pammy!” Borbala said with glee as she jumped up and down at the mere mention of her inspiration. “Pam Anderson is the ultimate swimsuit model legend for me. I remember getting a red swimsuit when I was in my teens and practicing my best Pammy poses in the mirror. It’s a dream of mine to shoot with her one day. What a career she has had, and if I can look as good as her at her age I will be a very happy woman!”

Borbala lives in the leafy suburbs on the outskirts of London with her little fur baby, Rocket the French Bulldog. She has currently taken in two Ukrainian refugees escaping the conflict in their own country proving that Borbala’s beauty is not just skin deep.

“She is just a dream to shoot with,” noted Studio977 in his exclusive interview with FHM. “Borbala is Hungary’s finest export since Goulash!”

We’re HustleTweeting about #HustleBootyTempTats supermodel (and FHM UK cover model) Borbala Kreutz, and you’re more than welcome to join the conversation on the Hustle Twitter HERE … on our ridiculously sensational Instagram HERE … or on our Facebook page HERE!