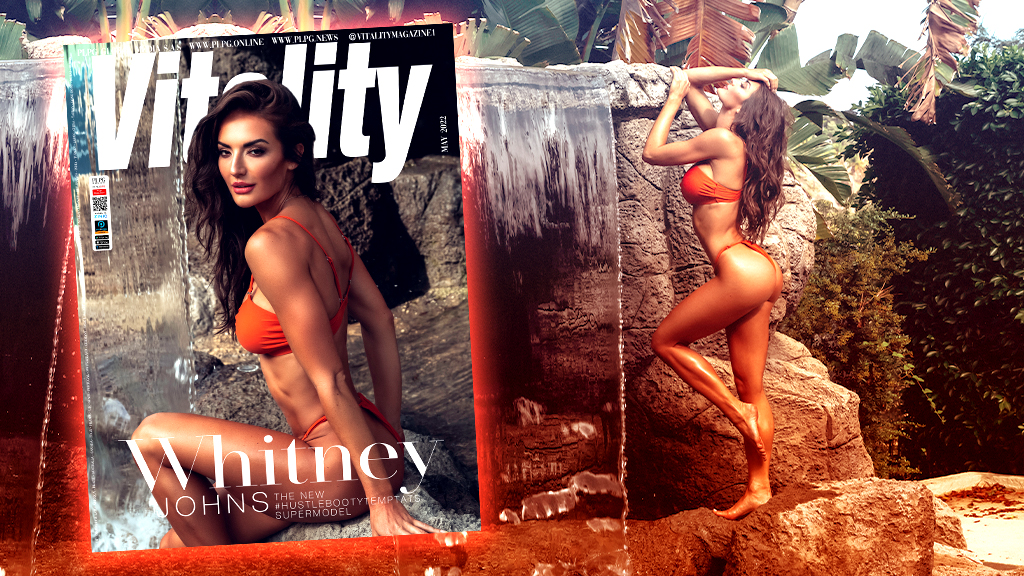 #BreakingNews: Fitness Goddess and Nutrition Guru Whitney Johns is the new #HustleBootyTempTats Supermodel! In this co-exclusive with Vitality Magazine, Jordan Perrino out-scoops the competition with today’s biggest story in the modeling world!

CLICK HERE TO ORDER VITALITY MAGAZINE WITH THE BREAKING NEWS ABOUT WHITNEY JOHNS ON THE COVER!

Whitney was born in Boise, Idaho which is coincidentally the hometown of former WWE superstar Torrie Wilson. When our reporter joked “what’s in the water there?” the always-glib Whitney cracked, “I think it’s because we’re potato-fed women!”

Carbs aside, Whitney is a staunch advocate for women’s health, telling us, “when I was a fitness model and bodybuilding champion, I got caught up in so many of the extreme measures the industry promotes. I paid the price for it, and I had to claw my way back from the damage that these unhealthy habits created for me, mentally – physically – and hormonally!”

It was at her lowest of lows that Whitney decided to tap into her own mindset of female empowerment and become a voice for women seeking an aesthetically pleasing body while not selling out their own health to achieve their goals.

“The only diet or workout program that’s going to work is the one you can realistically follow,” Whitney stated during our interview, which took place in her new Denver, Colorado home. “It should prioritize holistic health so you can actually sustain the results and feel good both inside and out.”

The gorgeous #PaulHeymanGirl continued, “gut health, mental health, and hormone health are pillars upon which my coaching philosophy rests. My programs have been created to support those of us on a mission. From the multifaceted individual who has a lot on their plate, refuses to settle and fights daily to become the best version of themselves to the person who works hard, plays hard and wants to look and feel great while doing it!”

So it was only natural for Whitney to be the founder of “Whitney Johns Nutrition,” an excusive line of brain, physical and women’s hormone health products. “I don’t believe in shortcuts, and I don’t like to mince words,” Whitney told us. “I am here to help women kick ass. There’s no more excuses accepted by the world. You’re either winning or you’re losing. I believe in choosing to win!”

The very first #HustleBootyTempTats supermodel was Kari Nautique, a blonde bombshell from Florida who shot to fame as the Playboy Cyber Playmate of the Year. Next up was Ellie Gonsalves, the Australian stunner who was quickly signed by Dwayne “The Rock” Johnson’s Seven Bucks Productions and has become Australia’s most visible new supermodel.

The World’s Most Beautiful Athlete, Paddleboarding champion Jala Sue is a #HustleBootyTempTats supermodel and is frequently seen around the world on FHM covers. The UK’s Miss Ali Drew, a noted fitness guru and Mixed Martial Arts broadcaster is a #HustleBootyTempTats supermodel. So is Daniella Chavez, the Chilean bombshell with 16,000,000 + Instagram followers who is best known for her “entanglement” with soccer legend Cristiano Ronaldo.

With the sudden demise of Victoria’s Secret’s “Angels” concept, Heyman and Co. understood the need to expand the #HustleBootyTempTats supermodel roster and make a big splash announcing the new additions for the 2022 roster.

Looking to exploit the rare opportunity to completely disrupt the supermodel world, they rented a $20,000,000 USD estate in Bel-Air, and put together what many have called the most ambitious supermodel photoshoot ever. Flying in some of the top supermodels and social media influencers from around the world, Heyman paired them with a slew of photographers to facilitate new collaborations that would make the entire world forget the “Angels” ever existed.

“As soon as Whitney walked on set, I knew we found a global sensation,” noted the famed photographer who goes by the name “Studio977.”

“Whitney just owns not only the room she walks into, but the set, the tennis court, the swimming pool and even the entire city. Her charisma is not to be denied!” “Whitney Johns is not an overnight sensation,” noted the star maker himself, Paul Heyman. “She scratched and clawed and struggled her way from rock bottom all the way to the top.” “We’re honored to have Whitney Johns on the #HustleBootyTempTats supermodel roster,” Heyman beamed with pride in his exclusive interview with Vitality Magazine. “The supermodel world is a better place with her in it!”

We’re HustleTweeting about #HustleBootyTempTats supermodel (and Vitality cover model) Whitney Johns, and you’re more than welcome to join the conversation on the Hustle Twitter HERE … on our ridiculously sensational Instagram HERE … or on our Facebook page HERE!