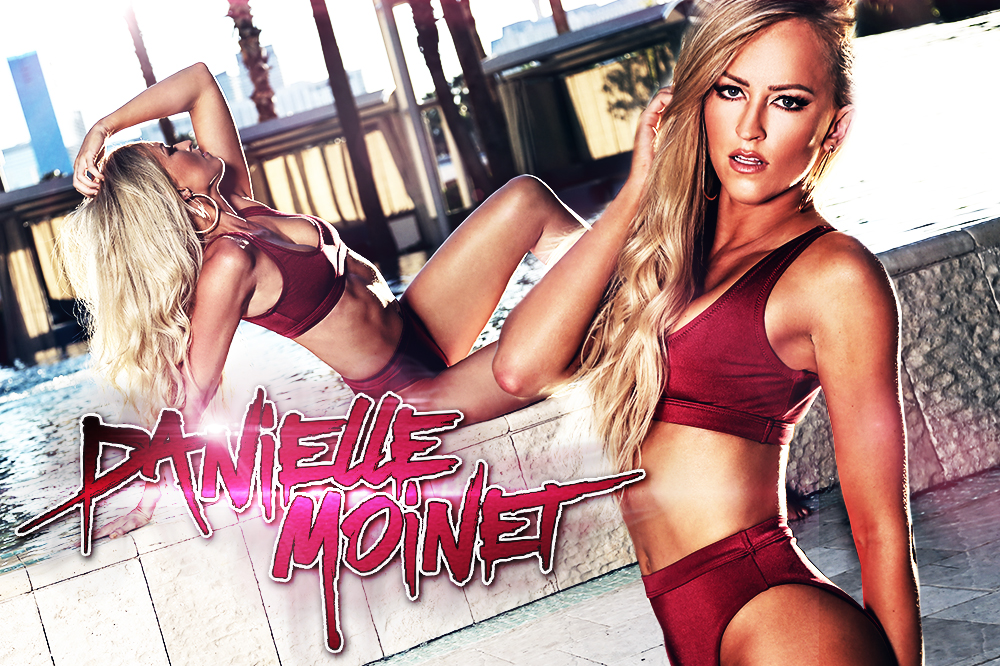 As WWE Superstar / WWE “Diva” Summer Rae, she was the beautiful blonde setting hearts afire every week on a television show seen around the world. It was a dream come true for the 5’10” Alpha Delta Pi girl from East Carolina University.

Today, Danielle Moinet is venturing out into the world with her worldwide travels as both an experience and a guide as to where her ambitions take her next. “I think my goals are one step shy of global domination,” Danielle laughed during her #HustleBootyTempTats supermodel photo session with world renowned photographer Mike Cohen at the Hard Rock Hotel and Casino Las Vegas. “But I reserve the right to not stop at that one step shy when I get there!”

We can attest to the fact Danielle was most likely not kidding.

“The first thing you notice about Danielle is how open she is about her ambition,” noted Cohen, who has collaborated with the biggest names in the supermodel world for years. “She doesn’t try to hide it, or be coy about it. She’s proud of her ambition. She wants everyone who works with her to know she is looking for the greatest amount of success she can achieve, and that she’s going to work exceptionally hard to achieve it!”

“It’s quite refreshing, actually …” Mike continued. “And she’s perfectly lovely about it. Her work ethic simply cannot be denied. When we were shooting in Las Vegas with a positively all star roster of #HustleBootyTempTats supermodels, we would ask, who wants to be in the makeup chair before sunrise to capture the sun coming up? and Danielle would be the first one with her hand up saying I’ll be there! Then, we got to ok, who wants to skip dinner and do the sunset shoot? she’d be the first one with her hand up in the air again, clamoring for that opportunity as well. She’s a remarkable person. She’s open about her desire to make it bigger than big. She works awfully hard and judges herself by a standard few can ever live up to. She doesn’t compromise her ambitions for anyone, nor does she allow herself to slack off even for a moment. And she’s only happy with herself if she lived up to her own expectations in terms of how hard she chased her dreams on that particular given day.”

“She’s a pleasure to work with,” noted the Hustle’s documentarian / videographer Ary Dalton, whose behind the scenes video from Daneille’s EXCLUSIVE photo shoot for the Hustle from Los Gatos, California can be found along with this story. “Danielle lives life like someone trying to finish strong after an hour of hard cardio training. It’s a real challenge to keep up with her, but the rewards come in the content one gets to create with this fabulous professional who only wants the very best product for her fans!”

CHECK OUT THIS SUPER SEXY PHOTO SHOOT FROM LOS GATOS!

CHECK OUT DANIELLE TURNING ON THE CHARM IN THIS EXCLUSIVE PHOTO SHOOT!

We are HustleTweeting about Danielle Moinet, and we here at the Hustle would like to mention how happy we are to be attach the #HustleBootyTempTats supermodel hashtag to her name. We’d like to invite you to join the conversation by following the Hustle Twitter HERE and liking our hyper-interactive Facebook page HERE!