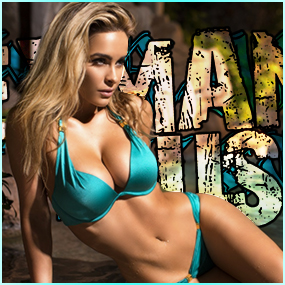 When we first posted CHRISTOS SEWELL’S EXCLUSIVE PHOTO SHOOT WITH ELLIE GONSALVES IN THE HEYMAN HUSTLE’S HOLLYWOOD GROTTO, we had an idea it was going to (here comes the cliche of the day) break the Internet. We had no clue just how popular a story that photo feature would become. As of Midnight Eastern Time ringing in the month of October, that story is now officially the most-read story on the Hustle EVER!

And with damn good reason!

“There was something about Ellie that night was even more spectacular than, well, ALWAYS!” laughed our boss Paul Heyman, who also shot a Heyman Hustle video featuring Ellie at the Grotto. “Ellie is just a natural beauty, a woman of fascinating beauty, but on this night, in this light, at this moment in time, she radiated like never before!”

“I can’t explain it,” stated #HustleBootyTempTats Documentary Director Ary Dalton, who shot the Hustle video that accompanies this story. “Ellie was actually GLOWING during this photo shoot!”

The photo session has been topic of such discussion, we’re going to actually release these stunning outtakes from that night in the Grotto. “Ellie’s beauty and personality comes through in these photos,” Christos noted. “I think these outtakes are as beautiful as anyone else’s best-ever photos!”

Of course, we’re HustleTweeting about The Stunning Outtake Photos of Super Model of the Year Ellie Gonsalves,and you’re more than welcome to join by following the Hustle on Twitter HERE or check out our interactive skills on Facebook HERE!