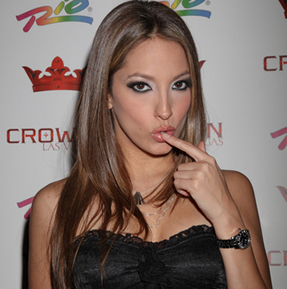 UFC 116 Fight Week Has Seen A Diverse Blend of Wild Personalities Descend Upon Sin City For The Fourth of July Weekend, But With The Exception of the Lesnar vs Carwin Fight and the Leben vs Akiyama Slugout, Nothing Has Ever Hit Las Vegas That Is As Wild as Jenna Haze!

The controversial adult film actress/director/producer, who has launched JennarationX Productions, hosted a party at Crown Nightclub, located in the Rio Hotel and Casino.

Jenna, who has certainly taken some vicious poundings in her lifetime, would probably have been shocked  by the viciousness of the 3rd round of the Leben vs Akiyama fight, let alone the 1st round of Brock Lesnar vs Shane Carwin.

Alas, Jenna was doing her own thing (we know there’s an easy joke there, so let’s pass up on it, shall we?) at the Crown Nightclub, as the 2009 AVN and 2010 XFANZ “Best Female” award winner brought her own brand of sex appeal to Las Vegas on the weekend of the biggest pay per view event of the year!