Hey You! Don't Even THINK About Pirating UFC 121 This Weekend! 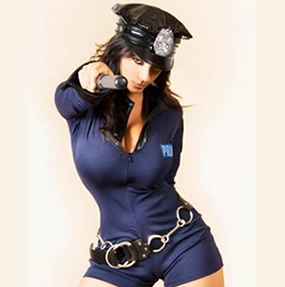 The Cop That Slaps The Cuffs on You Will Definitely NOT Look Like This!

KAREN McDOUGLAS IS PLAYBOY’S PLAYMATE IN THE NEWS!

MOST PERFECT BOOBIES YOU’LL EVER SEE!

THE PRIVATE PHOTOS OF ALETTA OCEAN!

THE BEST CLEAVAGE IN THE WORLD!

It’s a battle that has wreaked havoc on the music industry. The adult film industry has all but tapped out to its existence. Even the litigious World Wrestling Entertainment corporation has yet to develop a definitive strategy addressing the issue. But Zuffa, Inc. parent home of the Ultimate Fighting Championships are taking people to court and suing them should those people be found to be pirating the UFC pay per view feeds.

They’ve sued people already. They plan on suing a whole bunch more. In a report first posted on the website for The Las Vegas Sun, the Zuffa legal team has set their sights on a single person, a British man by the name of Daniel Wallace, who the company say illegally broadcasted several UFC events. Wallace owns a website, livevss.tv, and Zuffa’s attorneys allege that it was used for the live and unauthorized streaming of UFC Pay-Per-Views.

The Zuffa lawsuit contends “Given that events are streamed for free on defendant’s website, defendant derives revenue from selling advertising space on the website such that the viewer is continuously bombarded with.”

Wallace, should he lose his fight against UFC, is looking at some serious damage. Zuffa is seeking a court order to prevent any additional illegal streams, $150,000 for every illegal stream that was broadcasted, attorney’s fees, legal costs, and the forfeiture of any and all profits Wallace made off of the ad revenue that was on display during the alleged broadcasts. At the time of this report, Daniel Wallace has made no comment. That, by the way, is a very smart move.

So, if you’re even thinking about stealing from UFC President Dana White and The Fertitta Brothers, our advice is to think again. The decision as to whom Zuffa goes after next may be like a lethal lottery drawing, but who wants to be the name that’s picked?

We’re HustleTweeting about UFC 121, and you’re more than welcome to join the conversation by following the Hustle on Twitter HERE or by hitting LIKE on our hyper-interactive Facebook page HERE!