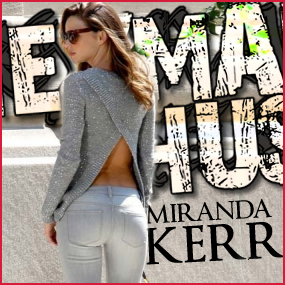 While “The Awesome Aussie” heats up the sidewalks in New York City, the Land Down Under is turned completely inside-out as the MILFalicious Victoria’s Secret uber-hottie switches agencies!

The woman our own Hustler De Tuti Hustlers Paul Heyman branded as The Awesome Aussie has made global headlines by switching agencies, all while being seen in and around New York City posing for the Victoria’s Secret Fall Fashion line.

As negotiations to renew her contract with David Jones are expected to start in the coming months, Miranda has strategically aligned herself with the world’s most powerful modeling agency to extract her maximum dollar value. She’s left her agency Chic Management, based in Sydney, and signed with global juggernaut IMG to cover her Australian deals, the model has confirmed she has switched teams.

Insiders speculate Miranda finds her deal with David Jones rather restrictive, and has reportedly privately expressed her desire to increase her fee dramatically or cut herself loose to pursue more lucrative commercial opportunities in Australia.Her time with the department store was extended when she took maternity leave after having her son, Flynn, with husband Orlando Bloom.

IMG already handles Kerr’s international modeling deals with the likes of Victoria’s Secret. Her alignment with the agency locally makes considerable sense commercially, especially as she heads into negotiations with David Jones.

While Chic’s founder, the former model Ursula Hufnagl has been supportive of Kerr’s move, inside the agency the mood has been very different, especially since the surprise resignation recently of Chic casting agent Danielle Ragenard who went to set up the IMG Sydney office, and took the huge Kerr contract with her.

Of course, we’re HustleTweeting about Miranda Kerr, and you’re more than welcome to join the conversation by following THE HEYMAN HUSTLE on Twitter HERE or write to us directly at hustleoncrave@gmail.com  Hey, have you checked out the Hustle’s Ultra High Quality You Tube Channel, with  exclusive videos featuring BROCK LESNAR’S “HERE COMES THE PAIN”  … ICE-T AND COCO’s SEX SECRETS … THE ULTIMATE WELTERWEIGHT BAD ASS NICK DIAZ … CONTROVERSIAL TEEN SENSATION TAYLOR MOMSEN … LEGENDARY MMA PIONEER FRANK SHAMROCK … THE WALKING RIOT MISSY HYATT … if you’re not subscribing, you’re missing something … and by the ways cheapos, it’s FREE! Yes, absolutely 100 percent FREE! What are you waiting for? Check it out HERE!

CLICK ON THE PICS BELOW SO YOU CAN REWARD YOUR EYES WITH
THE LOVELY IMAGES OF MIRANDA KERR IN VICTORIA’S SECRET FALL FASHIONS!