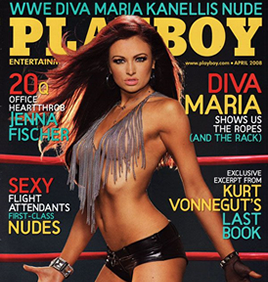 By popular demand, here’s Paul Heyman’s blog on Maria Kanellis and her awesome Playboy spread originally posted in THE SUN UK on March 10, 2008:

OK, I admit it. I checked out the Maria Kanellis edition of Playboy Magazine – and my decision to look past the front cover had absolutely nothing to do with a desire to read the articles.

Much like millions of others, I was more than eager to check out the pictures of my friend from Ottawa, Illinois.

Maria came to World Wrestling Entertainment as part of the 2004 Diva Search after getting some attention on the reality show Outback Jack.

Although Maria finished fifth – Christy Hemme won that year – it was apparent to everyone in WWE that Maria had that magic intangible “IT” factor.

She was young, gorgeous, athletic, funny, and cherished every moment she got to participate. She was a natural for the sports entertainment business.

Maria was also no dummy.

I had the privilege of working with her on a regular basis when I was assigned to develop talent in OVW in 2005, and she was an absolute pleasure to do business with.

Although no longer “required” by WWE to be in OVW, Maria showed up every Wednesday early and ready to contribute.

She watched the shows intently, offered suggestions for everyone’s character, and wanted to learn about production, finishes and storyline arcs.

While she caught a lot of flack for her then-budding relationship with CM Punk, she never shied away from storylines where she could be involved with another character, and never let her personal life cross into business.

There was one time we were doing a parking lot brawl with Matt Cappotelli and Johnny Jeter, and Mr Kennedy was back with us for a few weeks.

The scene was based around Kennedy starting to say his name, and Cappotelli – who was recovering from a broken leg at the time – swinging his crutch, leaving Kennedy speeding off in a car screaming his name out the window with the familiar cry of “Kennnnnedeeeeeeeee” trailing out like a Bugs Bunny cartoon.

At the last moment, Maria suggested that in the middle of the brawl, the car veers back into frame, Kennedy hops out of the automobile and screams “Kennnnneddeeeeeeee” to complete his catchphrase and then speeds right back out of the picture.

That idea put the scene over the top, and it was a great “character” moment for Ken.

It was just one of many ideas Maria pitched for other people. She was always hungry to add to the show.

I’m happy for Maria. More than any Diva presently in WWE, she’s earned this shot at mainstream recognition.

Much like Trish Stratus, she entered WWE as eye candy, but through hard work, perseverance and a healthy dose of pride in one’s performances, Maria has worked her ass off trying to be a good wrestler.

She has become a huge asset to Raw with her comedic timing, especially in her routines with Santino Marella.

Maria has a bright future ahead of her, especially considering the fact that she has an awe-inspiring flair for fashion design, and that she has musical talents WWE has not exploited yet.

So, is Maria the future of women’s wrestling?

That distinction belongs to Beth Phoenix. But that’s a discussion we should have in another blog.