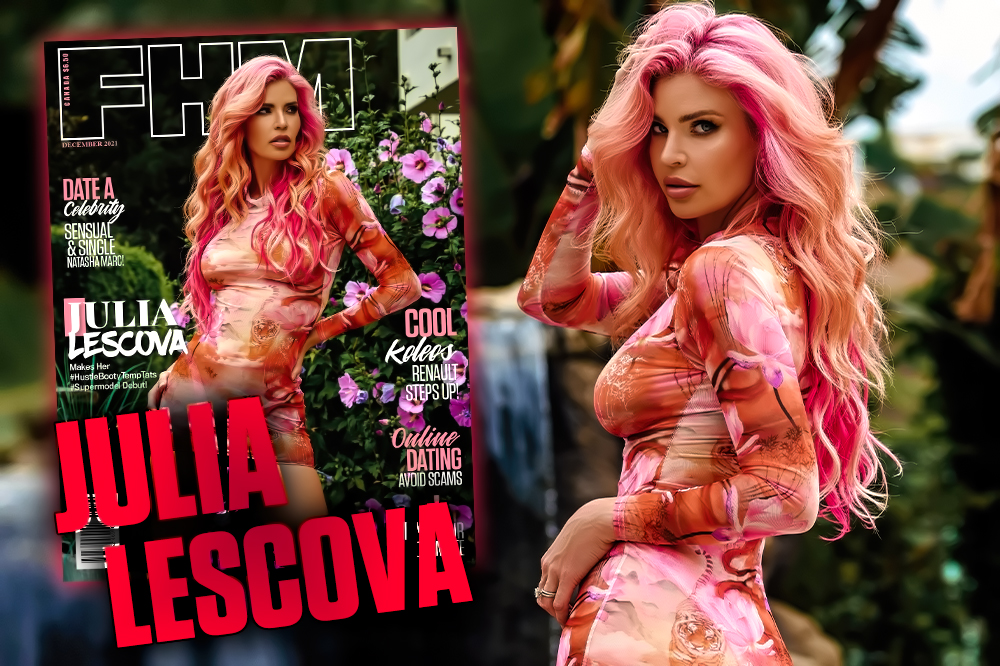 BREAKING NEWS: The #HustleBootyTempTats roster reveal for 2021-2022 continues, with supermodel Julia Lescova being named the second new addition to the #HBTT family! This story is being posted as an EXCLUSIVE co-release with the cover story detailing Julia’s ascent in the supermodel world, all the way to being the brand new #HustleBootyTempTats supermodel!

“Julia Lescova is recognized as one of the most spectacular and versatile models on the entire planet … ” noted photographer Elm Diaz, who collaborated with Julia on this exclusive photoshoot. “… and what an inspirational life story she has to tell!”

Indeed, the super sexy glamour girl was born in Daugavpils, located in the Republic of Latvia, on the coast of the Baltic Sea. She exploded on the scene as a model at the age of 15, when she was signed by an agency in Riga, the capital of Latvia. The bookings poured in immediately, as Julia could handle every conceivable type of shoot or appearance imaginable.

“Julia became an instant sensation, from editorial to swimsuit to runway to lingerie to glam,” Elm offered. “While most models rise to the top based on one particular sector of the industry, Julia mastered them all!”

Looking back on her humble beginnings, Julia recalled, “I came from nothing with my single mother raising our family and being completely broke. I went from starting my modeling career at the young age of 15 to living all over the world as a very young girl to somehow getting to the USA at 22 years old.”

It was in Los Angeles that Julia was quickly signed to become the face of Paul Marciano’s Guess brand, and landed a major Revlon contract as well.

Meanwhile, the supermodel world was changing as fast as the technology business. Victoria’s Secret abandoned the concept of the world’s most beautiful women, known as the Victoria’s Secret Angels, who walked the runway and posed in the brand’s iconic lingerie and swimwear. In place of the Angels concept, Victoria’s Secret launched the VS Collective. The new branding and marketing campaign was launched in June and includes prominent female figures such as professional soccer player Megan Rapinoe, actress Priyanka Chopra, tennis champion Naomi Osaka and transgender model Valentina Sampaio.

This left a huge void at the top of the supermodel universe, and it’s when sports entertainment legend and WWE superstar Paul Heyman stepped in. As co-founder of New York City’s Looking4Larry Agency, Heyman had already disrupted the modeling world with his “anti-influencer” influencer brand #HustleBootyTempTats … and the analytics proved that once again, Heyman could see the future trends before anyone else even had a clue.

The very first #HustleBootyTempTats supermodel was Kari Nautique, a blonde bombshell from Florida who shot to fame as the Playboy Cyber Playmate of the Year. Next up was Ellie Gonsalves, the Australian stunner who was quickly signed by Dwayne “The Rock” Johnson’s Seven Bucks Productions and has become Australia’s most visible new supermodel.

The World’s Most Beautiful Athlete, Paddleboarding champion Jala Sue is a #HustleBootyTempTats supermodel. So is fitness sensation and MMA broadcaster, the UK’s very own Miss Ali Drew. Daniella Chavez, the Chilean bombshell with 15,000,000 + Instagram followers who is best known for her “entanglement” with soccer legend Cristiano Ronaldo? She’s a #HustleBootyTempTats supermodel, too.

With the sudden demise of the “Angels” concept, Heyman and Co. understood the need to expand the #HustleBootyTempTats supermodel roster and make a big splash announcing the new additions for the 2022 roster.

Looking to exploit the rare opportunity to completely disrupt the supermodel world, they rented a $20,000,000 USD estate in Bel-Air, California and a $15,000,000 USD palace on Lake Las Vegas, and put together what many have called the most ambitious supermodel photoshoot ever.

Flying in some of the top supermodels and social media influencers from around the world, Heyman paired them with a slew of photographers to facilitate new collaborations that would make the entire world forget the “Angels” ever existed.

FHM Canada is pleased to present Julia’s exclusive collaboration with the award-winning Elm Diaz, as we look forward to 2022 being the year Julia Lescova finally gets her recognition as the no.1 supermodel in the entire world.

We’re HustleTweeting about #HustleBootyTempTats supermodel Julia Lescova, and you’re more than welcome to join the conversation on the Hustle Twitter HERE … on our ridiculously sensational Instagram HERE … or on our Facebook page HERE!