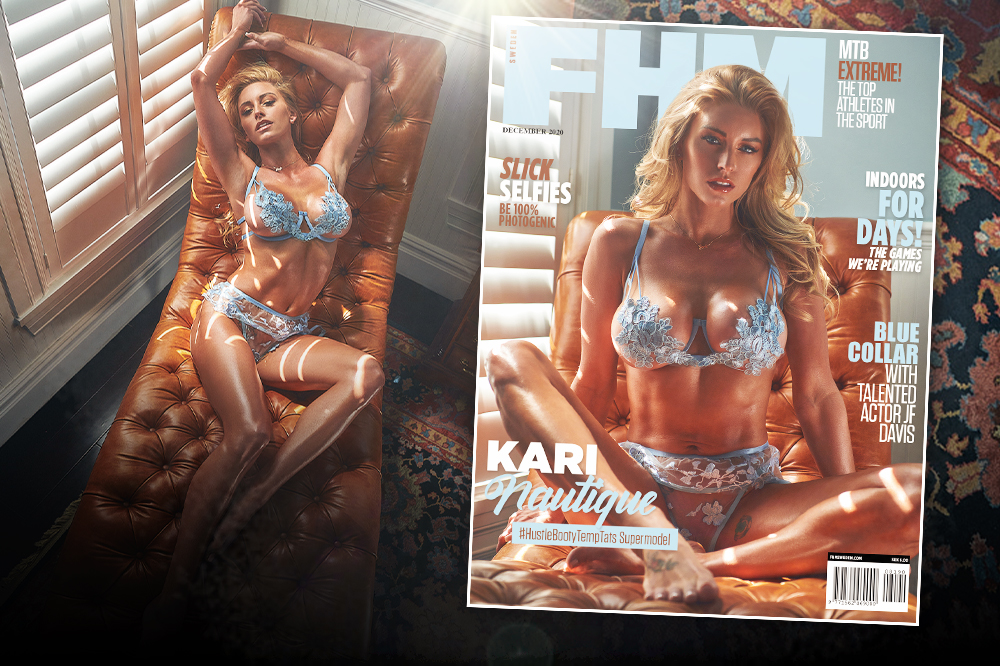 Fact: We have never done an EXCLUSIVE photoshoot with Kari … until now!

BREAKING NEWS: Kari’s very first #HustleBootyTempTats supermodel photoshoot is the cover story of this month’s FHM Sweden, which is being released at the same time as this article!

MORE BREAKING NEWS: This article contains the entire photo set … including the photos you won’t see in FHM Sweden!

When Kari Nautique arrived in Orlando, Florida for her very first #HustleBootyTempTats supermodel photoshoot, one could easily say an 8 year destiny was finally fulfilled. After all, the wealthiest man in the world, Jeff Bezos was recently quoted as saying “overnight success takes about ten years.” If that’s the case, Kari Nautique is on the fast track to be way ahead of schedule!

Kari Nautique is the original #HustleBootyTempTats supermodel. It all happened in 2012, when Kari was named the Playboy Cyber Playmate of the Year. In a hysterical series of back-and-forth tweets with WWE‘s sports entertainment legend and global marketing visionary Paul Heyman, Kari joked how she wanted to go to the beach in a thong wearing the logo of Heyman’s website, The Heyman Hustle, on each butt cheek. Lo and behold, the hashtag #HustleBootyTempTats was born.

Here we are, 8 years later, and #HustleBootyTempTats scores as No. 1 in all analytics for supermodel brands.

“It’s pretty remarkable,” noted celebrated photographer Joey Wright, who collaborated with Kari for this exclusive photo session. “A brand name that is a parody of the supermodel influencer society actually dominates the charts for the very industry it parodies!”

And here’s the kicker.

As quickly as Kari went viral being the Cyber Playmate of the Year and the very first #HustleBootyTempTats supermodel, she disappeared from the spotlight to start a family, giving birth to her son Jack and devoting all of her time to living life as a single mom.

But as Jack grew out of diapers and started listening to his mom’s motivational speeches about ambition and drive and desire and going after one’s dreams, the youngster knew his young mom had to show the world she’s got everything it takes to be No. 1!

So, instead of just teaching Jack about being passionate in creative pursuits and business endeavors, Kari decided to lead by example, and jumped back into the modeling world with both feet forward.

“It didn’t take long for the word to get out,” Heyman told us exclusively. “Kari Nautique was back, in the best shape of her life, and was looking to become the hottest model on the planet. Second place was simply not going to cut it for Kari Nautique!”

So FHM Sweden and the Hustle arranged for Kari’s #HustleBootyTempTats supermodel debut, shot at the HustleDome estate and production set outside of Orlando, Florida.

“We were looking for a pictorial that captures Kari’s striking sexuality,” Heyman stated. “Kari found a chair by a window and screamed out I’m ready to shoot!”

“It was so worth the wait,” Kari beamed as she looked at the raw images on photographer Joey Wright‘s camera.

“I wonder if Jeff Bezos would like to sponsor the next two years of me climbing the ladder of overnight success,” Kari fought back a tear as she smiled from ear to ear, knowing full well her son is going to see her on the cover of an internationally distributed magazine.

We’re HustleTweeting about Kari Nautique’s Very First EXCLUSIVE #HustleBootyTempTats Supermodel Photoshoot, and you’re more than welcome to join the conversation on the Hustle Twitter HERE … on our ridiculously sensational Instagram HERE … or on our Facebook page HERE!