Emily Addison: Why 2017 Will Be Her Year 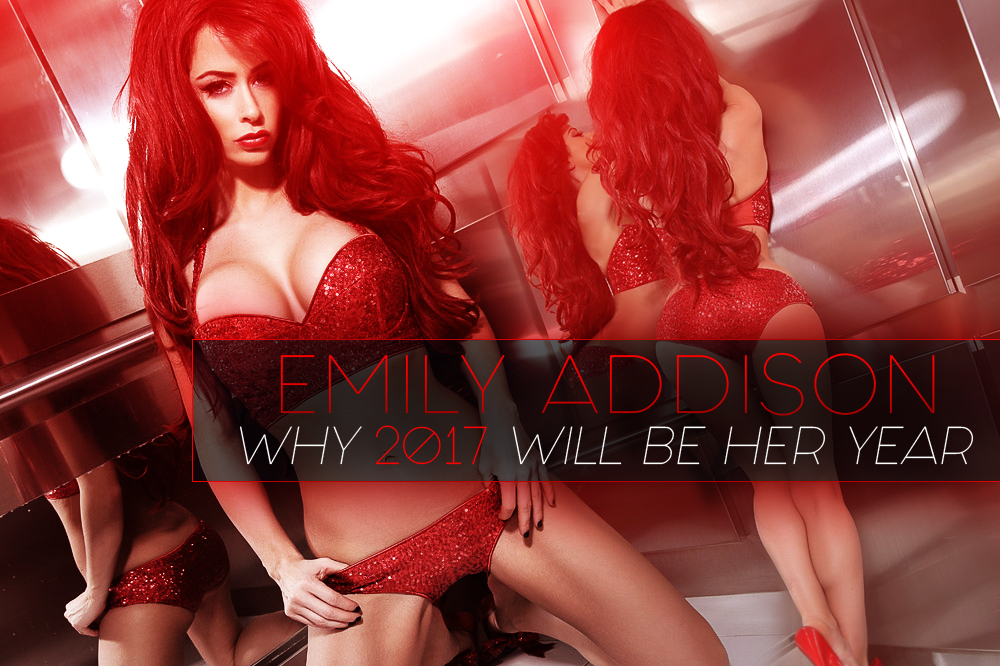 Emily Addison is a #HustleBootyTempTats supermodel with a worldwide following, and her EXCLUSIVE photo shoots here on the Hustle (which you can see HERE and HERE) are among the most popular pictorials ever posted on this website. With the spotlight on #HustleBootyTempTats supermodels at an all time high since the 1st #HustleBootyTempTats Supermodel of the Year Ellie Gonsalves was the main focus of a highly-acclaimed Super Bowl commercial and has been signed as Paul Marciano‘s sensational new branded Guess girl, we knew the next set of pictures we released needed to break barriers and be, with all political correctness aside, sexy as hell.

“Emily is a sex kitten, there’s no need to sugar coat a description of her,” noted world renown supermodel photographer Mike Cohen, who collaborated with Emily for this EXCLUSIVE photo shoot at the Hard Rock Hotel and Casino Las Vegas. “We grabbed a two story suite that was nothing short of spectacular, and our set designers put together a truly sexy look for the upper floor. I kept texting Emily that we were ready for her, and she kept saying I’m ready when you are! But she wasn’t upstairs with us. I kept thinking she was in the wrong suite. I texted her that the lighting, the décor, the set were all ready for her, and Emily texted back This is the sexiest set I’ve ever been on! I started thinking Paul (Heyman) was playing a joke on me!”

Mike continued, “So I decided to go downstairs and look outside for Emily, and as soon as the private elevator doors open, there she was. Emily Addison. #HustleBootyTempTats Supermodel and Sex Kitten. Sprawled over the floor of the elevator, enjoying the view of herself in the mirror, purring that whomever thought of shooting in the elevator was a genius!”

To this day, we don’t know if anyone has ever told Emily the ELEVATOR wasn’t the designated set. We had a set especially designed for her upstairs on the second floor of the suite. “I think this is one of those moments where everything happens for a reason,” Mike laughed. “… and as sexy as the set was that we put together for Emily upstairs, the elevator was infinitely sexier. At least with Emily purring all over the lift. She’s a one-of-a-kind, and a great representative of the #HustleBootyTempTats brand!”

The Heyman Hustle is proud to present Emily Addison: Why 2017 Will Be Her Year, featuring these photos by Mike Cohen shot EXCLUSIVELY for this article. We’re HustleTweeting about #HustleBootyTempTats Supermodel Emily Addison, and you’re more than welcome to join the conversation on the Hustle Twitter HERE and also on our hyper-interactive Facebook page HERE!