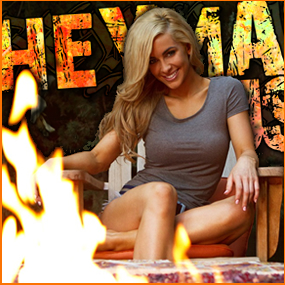 The #HustleBootyTempTats Super Model of the Year Scores a Major Victory Over South Africa’s Most Famous Victoria’s Secret Uber-Angel — Check Out The EXCLUSIVE Photo Shoot and Video!

The voting came down to the finals minutes, but #HustleBootyTempTats Super Model of the Year ELLIE GONSALVES edged out Victoria’s Secret Angel CANDICE SWANEPOEL in a bikini contest that had the entire Internet a-buzzing! Ellie, who skyrocketed to fame with three Maxim Australia covers in one year, has become one of the most dominant beauties on social media on a worldwide basis, as her INSTAGRAM … FACEBOOK … and TWITTER will attest. Candice, of course, is a global phenomenon, perhaps the most popular Victoria’s Secret Angel in the world today.

“Ellie is a rare beauty who truly loves to be in front of the camera,” noted super model photographer Christos Sewell, who is featured in the video. “There’s an old expression about loving what you do so much, that you never really work a day in your life. Ellie enjoys the entire process, and I can’t ever call a photo session with her work. It’s a true pleasure, a collaborative effort in which I firmly believe we’re really making art with these photographs!”

Ary Dalton, who shot the EXCLUSIVE Behind The Scenes video, couldn’t agree more. “Ellie brings more laughter and positive energy to a sexy photo shoot than anyone I’ve ever worked with,” Ary noted.
“By the time the shoot is over, my sides are hurting, and my face is stretched out from smiling so much!”

Of course, we’re HustleTweeting about Ellie Gonsalves’ Victory Over Candice Swanepoel, and you’re more than welcome to join the conversation by following The Heyman Hustle on Twitter HERE and you can also post your thoughts on our Facebook page HERE!