The Hustle Hottie Wows ’em In Sin City … And The Show Stoppers Are Just Getting Started!

The 1st season of THE HEYMAN HUSTLE video series, a wild assortment of interviews conducted by our very own Hustler De Tuti Hustlers Paul Heyman aired on the UK SUN‘s new digital network, and was a wild success. To this day, the most talked episode? Aubrey O’Day of Danity Kane. No contest, folks. The blonde bombshell was an uninhibited wild child who held nothing back.

Aubrey is back in the spotlight, and in a very big way. Danity Kane took the stage at the Liquid Pool Lounge at Aria in Las Vegas, and along with Dawn Richard and Shannon Bex, Aubrey tore the house down. Or over-flooded the pool area. Or whatever metaphor you want to use. The girls were a major hit!
Danity Kane also performed a second show, rockin’ it out at Haze Nightclub (also at Aria). With Vegas on fire from their performance, the ladies are about to embark on a brand new tour.

Of course, we’re HustleTweeting about Danity Kane, and you’re more than welcome to join the conversation by writing us on twitter HERE or write to us directly at hustleoncrave@gmail.com Hey, have you checked out the Hustle’s Ultra High Quality You Tube Channel, with exclusive videos featuring OUR WORLD EXCLUSIVE WITH MIKE TYSON … BROCK LESNAR’S “HERE COMES THE PAIN” … ICE-T AND COCO’s SEX SECRETS … MMA BAD BOY NICK DIAZ … the list goes on and on, so if you’re not subscribing, you’re missing something … and by the ways cheapos, it’s FREE! Yes, absolutely 100 percent FREE! What are you waiting for? Check it out HERE!

CLICK ON THE PICS BELOW TO SEE THE ENTIRE EXCLUSIVE PHOTO
GALLERY FEATURING “DANITY KANE” ON THE RED CARPET IN LAS VEGAS!

CHECK OUT AUBREY O’DAY FROM THE 1st SEASON OF THE HEYMAN HUSTLE! 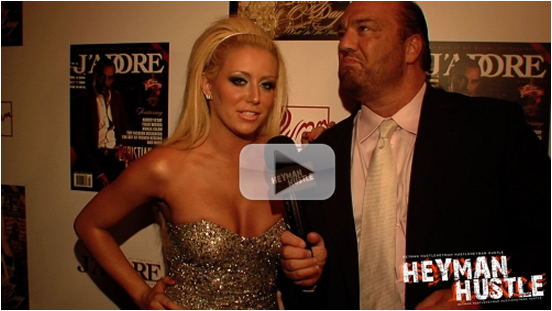 WE HERE AT THE HEYMAN HUSTLE HAVE ENSLAVED HIGHLY TRAINED
MONKEYS TO IGNORE THE FACT THEY ARE OVERWORKED AND UNDERPAID,
ALL IN THE NAME OF SCOURING THE WORLD WIDE WEB TO FIND THE FIFTEEN
MOST PROVOCATIVE STORIES ON THE INTERNET. ALL FOR YOU. NO ONE ELSE
BUT YOU. JUST YOU. AND ALL YOU NEED TO DO IS PICK WHICH PIC TO CLICK!