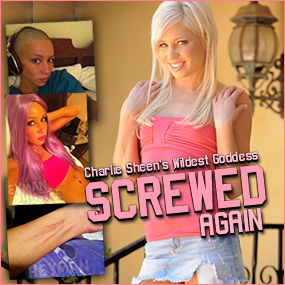 The Global Media Jumped All Over The Sensational Headline of Charlie Sheen’s Hooker-License-Bearing Former Goddess Declaring Bankruptcy … and Every Single One of Them Got It ALL WRONG!

The media just loves a downward spiral. Ever since Courtney Roskop was exposed as CHARLIE SHEEN’S WILDEST PAY-FOR-PLAY GODDESS better known as Kacey Jordan, the media has harped on her suicide attempts, her ACTUAL LICENSE TO BE A HOOKER, and almost every move imaginable that could be twisted in a sensational headline. Of course, the real story is so much deeper than what the media portrays it to be, but why let the facts get in the way of a great story.

Had the media bothered to do a lick (no pun intended) of research, they would know Courtney has been touring American cities left and right, including a recent stint in Los Angeles (does someone who goes to BOA Steakhouse qualify as “broke” or “destitute”) and a two week “tour” of Chicago.

Only Courtney Roskop’s meltdown won’t be public. Only the “easy” headlines will be picked up. A current touring pornstar-for-hire with multiple suicide attempts and a penchant for outing the truth on her Twitter account and her social media forums is not what the media is looking for.

A discussion about this troubled personality is too complicated. It doesn’t fit into a few paragraphs. It actually takes research, and compassion, and understanding, and documentation, and a frank discussion about a person who has cried out for help in the most public manner possible for her … a Twitter account followed by her fans … only to fall on deaf ears, for the headlines of “bankruptcy” and “Charlie Sheen’s Goddess” are much easier to write, much like a sound bite from a politician allegedly addresses the issues, when we all know the sound bites don’t even begin to explain the true positions of the politician, nor even try to explain the core issues the sound bite is supposed to address.

Just the other night, Courtney posted on Twitter a rant in which she said  ” … Tuesday night. my ex boyfriend stole 4,000 out of my purse out of spite in doing my job. i usually would give out his number via twitter… I have before and I had a lot of rage. Instead I was so hurt I had to see a doctor for I have never been betrayed so much in my life. yes it’s only 4k and infact I had I someone reach out to me just give me double what was stolen. So i’m thankful for that  … SO… now that i’ve recovered. i’ve decided to let Karma take it’s course. i slipped on sobriety for a day, then had personal help get me back on track. Made it to my court this morning, (Won) and back on pain killers to finally get back to my overflowing mailbox this evening …  if your wondering why I speak of pain killers as a good thing. they are. they stop my addiction of self destruction things like cocaine & alcohol or anything but. i’m an addict who found a better alternative in which for some reason helps me focus and lost my”crazy” no i’m not trying to justify. But after being so heart broken, and to realize who’s willing to step in and how many people who are ready to back me up, even you guys  … was just a breath of fresh air. I know how & y I deserve those people and my followers because, honesty and truly being a good person and not burning bridges. I was raised right and it really payed off… OK. So i’m back now… Thanks for letting me ramble and I hope it was better than a lil yelp check-in.”

Ladies and gentlemen, we’re HustleTweeting about Courtney Roskop aka Kacey Jordan, and you’re more than welcome to join the conversation by following us on twitter HERE or write us directly at hustleoncrave@gmail.com  Hey, have you checked out the Hustle’s Ultra High Quality You Tube Channel, with exclusive videos featuring OUR WORLD EXCLUSIVE WITH MIKE TYSON … BROCK LESNAR’S “HERE COMES THE PAIN” … ICE-T AND COCO’s SEX SECRETS … TEEN SENSATION TAYLOR MOMSEN … UFC BAD BOY NICK DIAZ … THE WALKING RIOT MISSY HYATT if you’re not subscribing, you’re missing something … and by the ways cheapos, it’s FREE! Yes, absolutely 100 percent FREE! What are you waiting for? Check it out HERE!