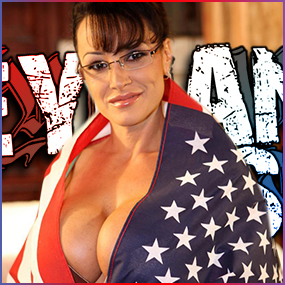 The Former Governor of Alaska Has Been Left Out in the Cold!

Fox News has dumped Sarah Palin. The cable news network declined to renew the contract and claims it “amicably parted ways” on June 1st. Palin has not appeared regularly on Fox in quite some time.A recent expose on Politico suggests Fox execs “consider her less relevant now” and perhaps producers on Fox News programs had stopped seeking her input on the issues of the day. Palin originally signed with the network in January 2010, months after she resigned as the Governor of Alaska. Back then, her commentary was much sought after, in part because she kept her name in the news as a possible 2012 Republican presidential candidate … until October 2011, that is, when she declared that she wouldn’t be running. Palin has plenty to do, what with her show on the Sportsman Channel — “Amazing America With Sarah Palin” – plus all manner of political activities with her SarahPAC.

We’re HustleTweeting about … OMFG THESE AREN’T PICTURES OF SARAH PALIN!!!

We need to figure out this conspiracy. Who, indeed, is Nailin’ Palin?

While we investigate (hmmmmmmmm … Lisa Ann, is that you), take a moment and check out these non-partisan links:

DEMI ROSE SHOWS OFF THE GOODS!

ANJA RUBIK SEXES UP THE MOST ELITE BEACHES IN EUROPE!

LOOK AT THIS FRICKIN’ IDIOT!

FITNESS MODEL BUSTS OUT TO THE EXTREME!

Please feel free to HustleTweet us your conspiracy theory, which you can do when you join the conversation by following the Hustle on Twitter HERE or by hitting LIKE on our hyper-interactive Facebook page HERE!