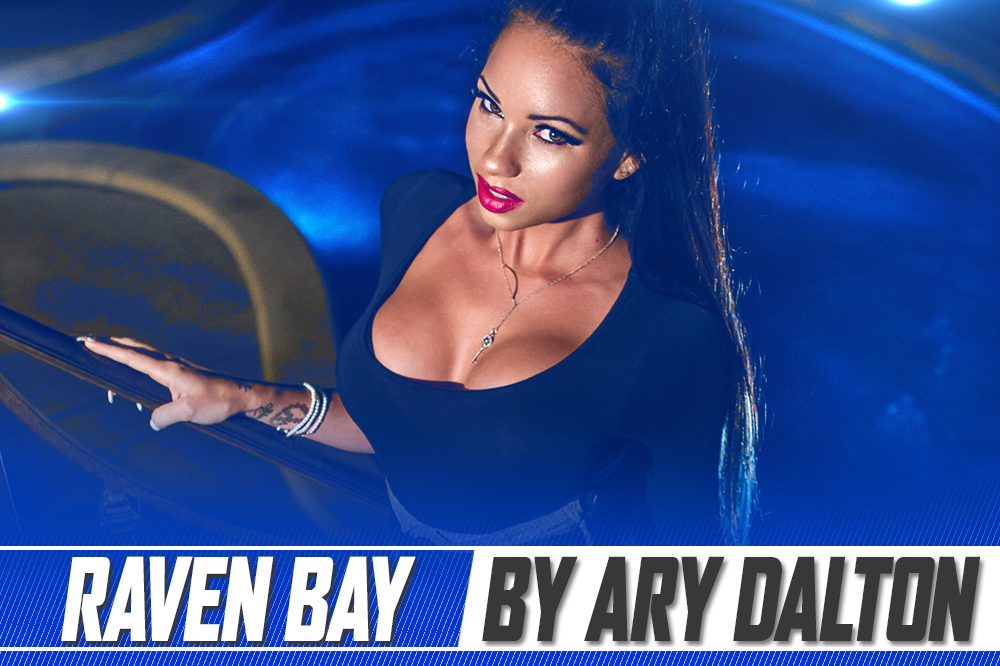 #HustleBootyTempTats documentarian Ary Dalton had been photographing at THE HEYMAN HUSTLE‘s bad ass estate in the Mount Olympus section of Los Angeles since the sun came up. And now, almost fourteen hours later, as the sun was about to set, Ary was getting ready to head downtown to cover a major event.

“There had been a lot of buzz on social media about the photo shoots we were doing on Mount Olympus,” Ary noted. “It was truly one of our most productive days.”

Just as Ary was about to pack up the lights and head downtown, the security gate buzzed him. “Raven Bay is here …”

For those unfamiliar with the name, Raven Bay is a 26 year old Scottish – Jamaican – Italian beauty from Clearwater, Florida whose devastating beauty has been her claim to fame in a niche industry. “I’ve always wanted to do a mainstream photo shoot,” the brunette bombshell revealed. “I just wanted to make sure I was working with the right photographer, the best writers, the coolest platform I could get involved with!”

After we found someone to cover for Ary downtown, we set up for a sundown shoot with Raven. “There’s a fifteen minute period when the sun is just about to completely drop that gives the most breathtaking light for a glamour photo shoot,” Ary exclaimed. “Our hearts were pounding because we were running against the clock.”

“I’m really proud of these photos!” Raven said excitedly. “This is the first of many I’ve now scheduled to do with THE HEYMAN HUSTLE!”

So … what do YOU think of Raven Bay‘s very first supermodel photo shoot? We’re HustleTweeting about #HustleBootyTempTats and you’re more than welcome to join the conversation by following the Hustle on Twitter HERE or by hitting LIKE on our hyper-interactive Facebook page HERE!