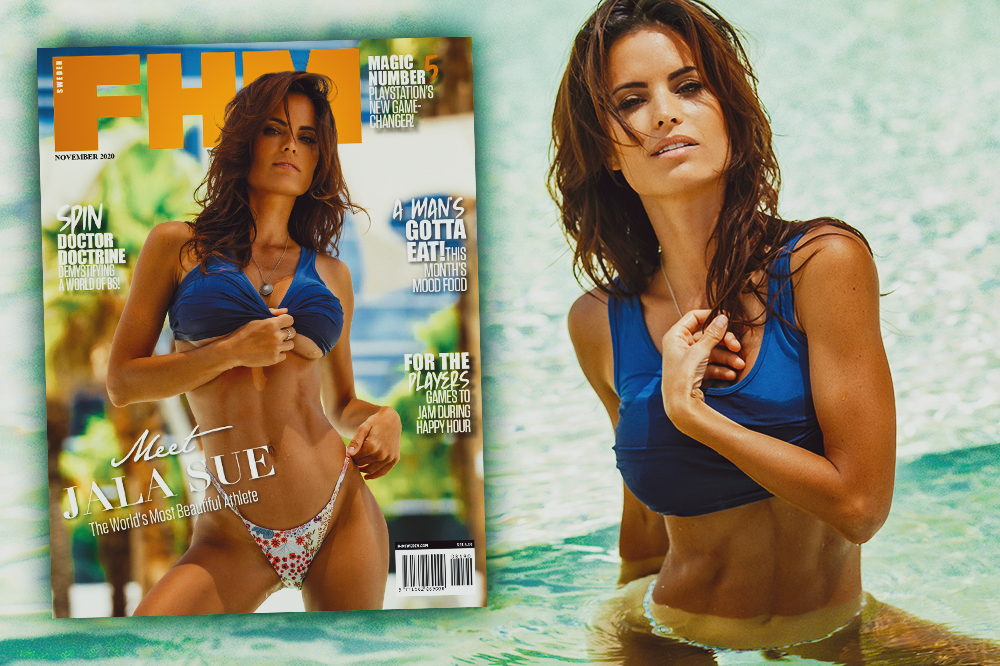 BREAKING NEWS: The buzz around this story is so enormous, as we were ready to post these amazing images, FHM Sweden is publishing a cover story about Jala Sue’s #HustleBootyTempTats supermodel debut.

MORE BREAKING NEWS: This article contains the entire photo set … including the photos you won’t see in FHM Sweden!

So, who is Jala Sue?

Jala Sue is a professional paddle boarding champion from Northern Michigan in the United States who has rocketed to worldwide notoriety in the past few weeks as a globally trending and breakout #HustleBootyTempTats Supermodel.

What exactly is a #HustleBootyTempTats Supermodel?

Well, that’s a funny question, and perhaps an even funnier answer. #HustleBootyTempTats is the brainchild of sports entertainment legend Paul Heyman, the “Advocate” / “Special Counsel” for such WWE and UFC legends as Brock Lesnar and Ronda Rousey (another amazing, groundbreaking female), and the current reigning defending Undisputed WWE Universal Heavyweight Champion Roman Reigns.

Heyman discovered Jala Sue when a number of paddle boarding fans started an email and social media campaign to get Jala Sue noticed.

Heyman, who was named one of the top 100 global marketers by the prestigious Ad Age magazine, is co-owner of a New York based agency, The Looking4Larry Agency aka L4L.

“Our agency was doing supermodel photoshoots in Las Vegas for our Heyman Hustle website, and we were besieged with emails and letters and tweets and Instagram messages from fans of Jala Sue,” Heyman noted. “Bluntly, I’ve never seen a more beautiful competitor in any sport, anywhere in the world! But what impressed me the most about Jala Sue is that there simply is not a physical challenge she isn’t up for!”

“‘I’ve made my living describing larger than life personas in a grand environment,” Heyman laughed. “I can only describe Jala Sue … (deep sigh) … as indescribably gorgeous!”

World famous supermodel and fitness photographer Harry Grigsby, co-founder of LHGFX Photography, was brought in to collaborate with Jala Sue for this, her very first exclusive cover photo shoot.

“Jala Sue is sensational … she’s spectacular … and she’s wonderful to work with,” Harry exclaimed. “I couldn’t believe the beauty that was radiating through my camera lens. Paul is right. She defies description, as well as age!”

Ah, yes … we neglected to mention. This drop dead gorgeous brunette beauty is Forty and Fabulous. “No one believes me when I tell them I am 41 years old,” Jala Sue laughed. “I tell them my kids keep me young.”

Yes, this super fit paddle boarding champion is the proud mom of four kids. “They are my everything,” Jala Sue stated with pride. “I’m flattered by everyone’s kind words about me, but it’s my role as Mom that means the most to me.”

Just as this story is going public, Jala Sue‘s appearance in Las Vegas has been trending worldwide. Not only are these EXCLUSIVE images making their debut on the Hustle, they’ve been picked up as the cover story for this month’s FHM Sweden as well!

Jala Sue appears to be not only the most beautiful athlete in sports, but also the hottest new supermodel of the year.

And best of all … you saw her here first!

We are HustleTweeting about Jala Sue, and you’re more than welcome to join the conversation on the Hustle Twitter HERE … on our ridiculously sensational Instagram HERE … or on our Facebook page HERE!