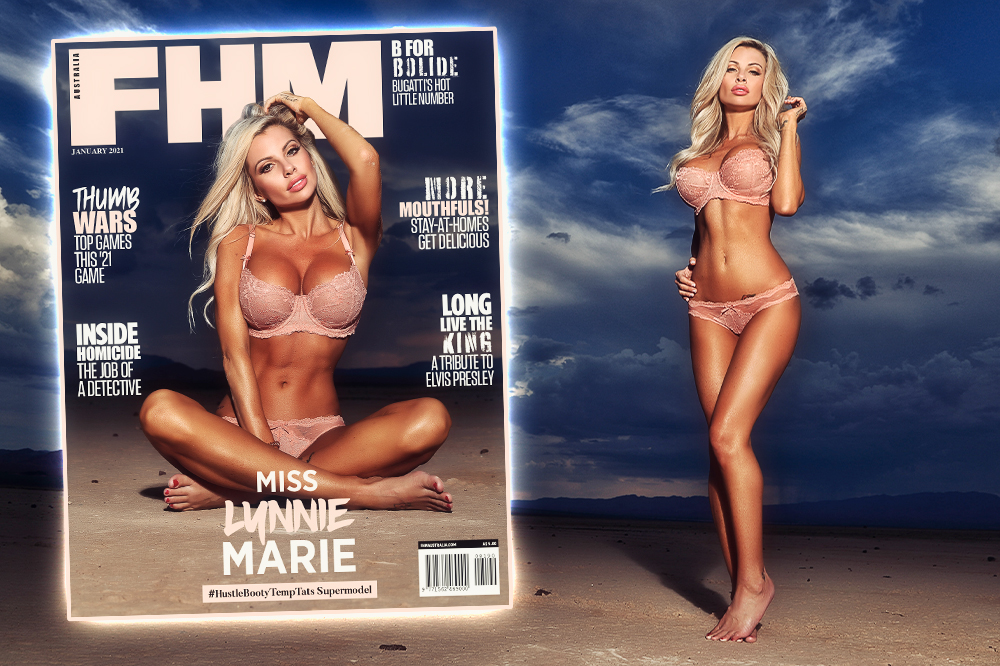 BREAKING NEWS: The Heyman Hustle’s historic journey into the Nevada desert is being featured as a co-exclusive with the January, 2021 edition of FHM Australia, with #HustleBootyTempTats supermodel Miss Lynnie Marie gracing the cover.

MORE BREAKING NEWS: This article contains the entire photo set … including the photos you won’t see in FHM Australia!

That may appear to be a bold statement, but for those “in the know,” it’s not a prediction … it’s a spoiler!

Ah, yes, the famous line made popular by WWE sports entertainment legend and global marketing guru Paul Heyman, the creator of the #HustleBootyTempTats supermodel brand. Mr Heyman is known for his eye in spotting great talent and the next generation of superstars in both the sports entertainment world and the supermodel universe, and his #HustleBootyTempTats supermodel brand is going all out to promote and market the sensational Miss Lynnie Marie, the World’s Most Fabulous Blonde Bombshell.

“We were shooting into the night in Las Vegas, and the sky was quite dramatic,” noted world renowned supermodel photographer Mike Cohen, who collaborated with Miss Lynnie Marie on this sensational photoshoot. “We decided to jump on the opportunity and drive out into the middle of the desert and just start shooting.”

“In my wildest dreams,” Cohen laughed, “I couldn’t imagine the images would capture the moment to this degree!”

Indeed, Miss Lynnie Marie carries the magic with her, as the impossibly sexy beauty left a career as a highly sought-after esthetician to become a model.

“It was a tremendous risk for Miss Lynnie Marie,” stated Paul Heyman in an exclusive comment offered to FHM Australia. “In a modeling world filled with the California beach bunny type, how does one stand out?”

Heyman laughed out loud, “… and that’s the secret recipe to Miss Lynnie Marie’s success. She really DOES stand out, separates herself from the crowd and captures everyone’s attention without even trying. Her charisma shines through, and she ends up owning the attention of everyone whose eyes are bestowed the honor of gazing upon her beauty!”

And so, we are here to welcome the year 2021 in style, with an exclusive photoshoot from the Nevada desert that has us all looking forward to the next time we get to feature the World’s Most Fabulous Blonde Bombshell, #HustleBootyTempTats supermodel (and let’s not forget #PaulHeymanGirl) Miss Lynnie Marie!

We’re HustleTweeting about this EXCLUSIVE photoshoot with #HustleBootyTempTats supermodel Miss Lynnie Marie that is the cover story on this month’s FHM Australia, and you’re more than welcome to join the conversation on the Hustle Twitter HERE … on our ridiculously sensational Instagram HERE … or on our Facebook page HERE!